The past year has given us plenty of reasons to want to escape reality. For some people, that’s meant binge-watching cotton-candy TV, like Bridgerton or Emily in Paris. For others, it’s meant turning off news notifications and going to bed at 9 p.m. For me, though, it’s meant embracing the world of VR workouts.

It might sound fringe, but according to recent data from IDTechEx, the virtual reality market will be worth $30 billion by the year 2030. And with the launch of the Oculus Quest 2 ($299) in October, 2020, accessing this type of tech from your living room is a cinch. It comes with a headset and two controllers and offers dozens of different apps that gamify the fitness experience. There’s Beat Saber, a rhythm-based dance cardio workout; Creed: Rise To Glory, which allows you to box with none other than Michael B. Jordan; and Supernatural, which serves up trainer-led HIIT, strength-training, and meditation routines set in beautiful locales around the globe. There’s a modality for every sort of fitness aficionado—all you have to do is slide on the headset (which, by the way, takes up zero floor space), and you’re instantly immersed in an entirely new world.

“With the launch of the Quest 2, it was the first time that we were able to bring together a cordless experience and higher-resolution graphics at a $299 price point,” says Meaghan Fitzgerald, the director of product marketing for experiences at Oculus. “All of a sudden, VR became much more accessible to different groups of people—not just a core audience of gamer. We were seeing more women coming into VR and more of the experiences outside of gaming, like gamified fitness and working out in the headset, becoming more popular.” 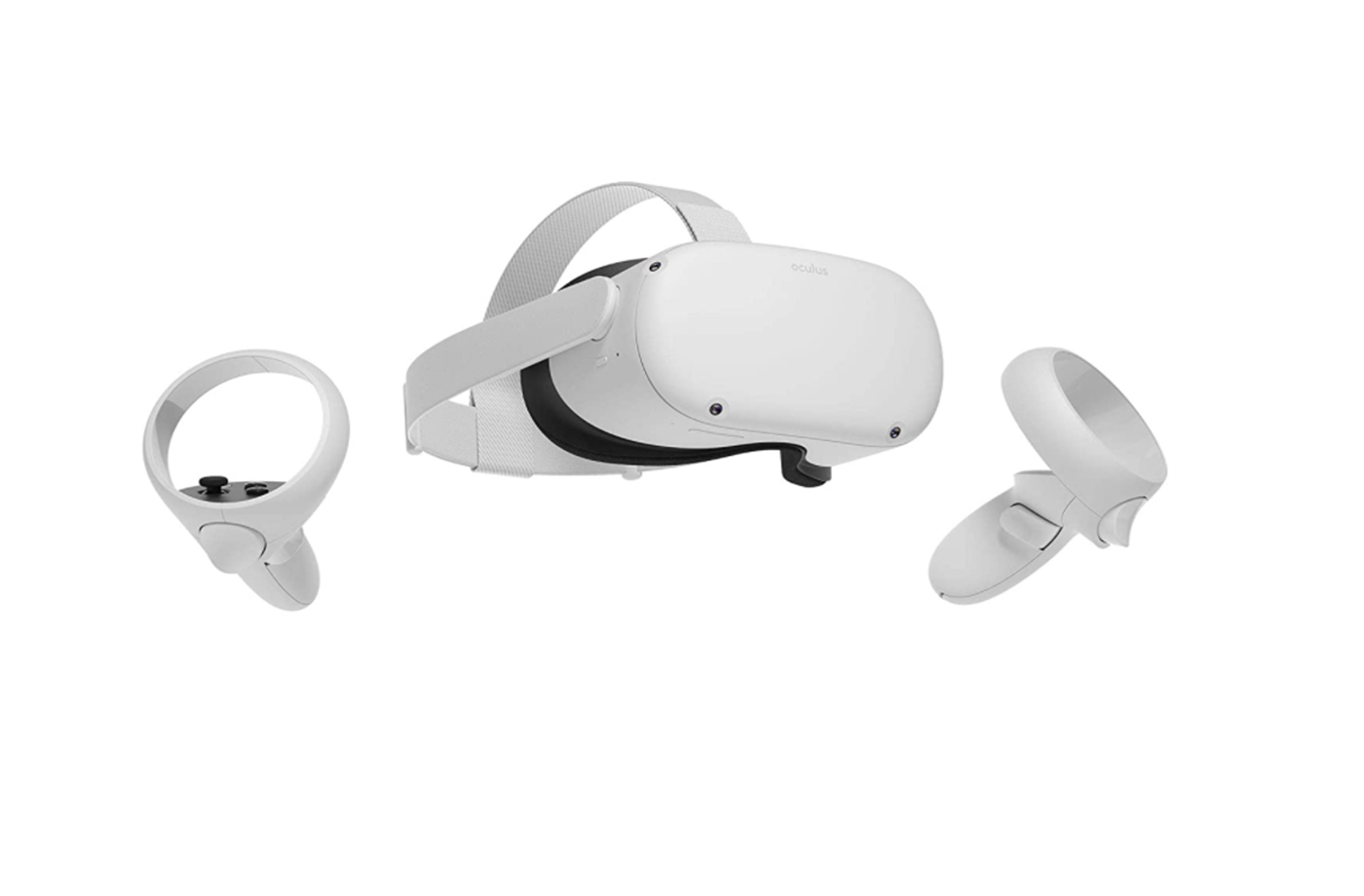 I live in a studio apartment, which means that my at-home workouts usually take place on the sliver of open floor between my bed and my coffee table. And after a year of doing push-ups three feet from my bed while watching a trainer coach me on my iPhone screen, I was feeling seriously burned out and unmotivated. But with the Oculus, I’m able to pretend that I’m somewhere completely different—for 20 minutes a day, at least.

“[Virtual reality gives you] the true ability to completely immerse yourself, not only in the movement you’re doing and the music you’re listening to, but really transport into a different place and environment, which is a total game changer,” says Leanne Pedante, head of fitness at Supernatural (my personal favorite VR fitness experience). “At this time when everyone has been in their home for a year, the ability to put on a magical headset and be swept away to the pyramids of Giza or the Cayman Islands and do your workout there instead of in your apartment is a huge, huge gift.”

In the last few months, my headset has allowed me to box in a ring surrounded by spectators, dance my ass off in a club, and meditate at Machu Picchu—activities that COVID-19 has rendered impossible to experience IRL—all without actually having to leave my living room.

While we’ve seen various forms of “fitness travel” taking over our digital workouts, the Quest 2 virtual reality experience takes it to a whole new level. “There are other platforms that have you watching a video of nature while you’re still sitting on a stationary bike inside a gym or inside your house, but there’s a disconnect because you’re not actually in nature,” says Pedante. “With Supernatural, it’s so realistic because you’re getting 360 degrees of this virtual reality and your apartment disappears—there are birds flying above you, water rippling below you, and you can hear the sound of the wind on the palm trees.”

The creators of Supernatural set out to create a workout that didn’t actually feel like a workout, and were inspired by activities like skiing, snowboarding, and surfing, “where you’re doing this very rigorous thing with your body, but you’re not thinking about the fact that you’re exercising because you’re having this other experience,” says Pedante. And that’s exactly what all the VR workouts on my Quest 2 have allowed me to do.

Aside from just being really cool, there are some legitimate benefits that come along with sweating it out in a virtual world.  “From a mental standpoint, people are more motivated to exercise because it’s giving them something new to look at,” sports psychologist Janine Delaney, PhD, previously told Well+Good. “It allows them to visualize what could be possible when all of this passes and travel opens up, and I think people are very open and receptive to these types of experiences because any time you’re able to do something different with your workouts is a good thing.” On days when working out is the last thing I want to do, I grab my Oculus, because suffering through burpees doesn’t feel quite so terrible when you’re doing them on a glacier in Iceland.

VR workouts also offer the type of community that people have been craving as they’ve been cut off from their usual studios and gyms. “One of the things that is really exciting about VR is that you have a sense of presence with the other people who are virtually in the space with you—you feel like you’re right there with [them]” says Fitzgerald. “We would never say that VR is going to replace social interactions, because there is something really special about that, but it does expand your range of possibilities for fitness and social gaming when you can’t have that or want to be with people who are far away while you work out.”

At a time when actual reality has been less-than-stellar, VR workouts have helped me look forward to my living room fitness routine—and that’s exactly the kind of healthy escapism we all need right now.

Oh hi! You look like someone who loves free workouts, discounts for cult-fave wellness brands, and exclusive Well+Good content. Sign up for Well+, our online community of wellness insiders, and unlock your rewards instantly.

Our editors independently select these products. Making a purchase through our links may earn Well+Good a commission.

8 Picks For Oculus Quest And PC

Facebook Stock Is Cheap. Here’s How It Could Gain 20% or More

What Day The 25th Anniversary Actually Is