Federal Reserve officials signalled that they were ready to make changes to their asset purchase programme if circumstances shifted, leaving the door open for new action but ruling out any immediate steps, according to minutes from their last policy meeting.

“While participants judged that immediate adjustments to the pace and composition of asset purchases were not necessary, they recognised that circumstances could shift to warrant such adjustments,” the minutes of the Federal Open Market Committee meeting held in early November said.

“Accordingly, participants saw the ongoing careful consideration of potential next steps for enhancing the committee’s guidance for its asset purchases as appropriate.”

The release of the minutes comes as US economic data — including an increase in new jobless benefit applications — has pointed to slowing or even stalling recovery because of the recent new surge in coronavirus cases and fading fiscal support.

The minutes revealed the extent to which the central bank is converging on further steps to boost the recovery through its asset purchase programme, but still lacking a firm consensus on the details and timing.

The minutes indicated that “many participants judged that the committee might want to enhance its guidance for asset purchases fairly soon”, while a “few” were “hesitant” to make changes in the near-term. The sceptics cited the “considerable uncertainty about the economic outlook and the appropriate use of balance sheet policies given that uncertainty”.

Several participants “noted the possibility that there may be limits to the amount of additional accommodation that could be provided through increases in the Federal Reserve’s asset holdings in light of the low level of longer-term yields, and they expressed concerns that a significant expansion in asset holdings could have unintended consequences”, the minutes said.

The release of the minutes also comes amid a rift between the Fed and the Treasury department over the fate of central bank’s crisis lending facilities rolled out since March to support financial markets.

The bulk of the programmes are set to expire at the end of December, prompting concern among investors that the financial system will lose an important backstop at a time when coronavirus cases are surging globally and the economic recovery appears to be faltering.

Strategists say the unexpected decision by the Treasury may compel the Fed to act preemptively at its December meeting to ward off any potential volatility. They are keeping a close eye on financial conditions, which by some measures are easier even than before the coronavirus outbreak roiled markets, for any indication that businesses are finding it harder or more expensive to raise capital.

A team of analysts at Morgan Stanley led by Ellen Zentner wrote: “While we think the probability has increased that the Fed would choose to extend the duration of its asset purchases at its December meeting in response to these developments, we continue to emphasise just how much financial conditions have remained little moved since the announcement from the Treasury secretary, leaving little scope for additional monetary easing to make much of an impact.” 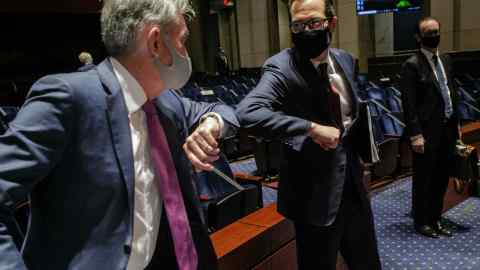 Still, the strategists said they see a 35 per cent chance the Fed opts for this policy pivot next month.

Investors have clamoured for more clarity from the central bank about its bond-buying plans, having committed since June to snap up $80bn of Treasury securities of all maturities each month. The Fed has since indicated the aim is to both support the economic recovery and ensure the smooth functioning of financial markets, but some fund managers believe the Fed should lay out more concretely the conditions under which it would consider adjusting either the composition or the aggregate size of its purchases.

According to the minutes, “most” FOMC members favoured eventually shifting to “qualitative outcome-based guidance for asset purchases that links the horizon over which the committee anticipates it would be conducting asset purchases to economic conditions”.

Man accused of disrupting flight by not wearing mask, urinating in cabin