The woman speaks out to local news outlets, but refuses to identify herself.

The woman caught throwing a fit at a North Hollywood Trader Joe’s after being asked to wear a mask is telling her side of the story.

Keeping her name and identity hidden, the woman spoke to both ABC7 and Fox11 in Los Angeles after footage of her meltdown went viral over the weekend.

In the clip, the lady is seen being surrounded by Trader Joe’s employees — all of whom are wearing masks — as she begins to shout at them.

“You’re a f–king Democratic pig, all of you,” she’s heard saying. “That man harassed me for not wearing a mask. I have a breathing problem, my doctor would not let me wear a mask, so anyone harassing me to wear a mask, you guys are violating federal law. Get that on camera!”

The footage also shows her throwing her basket at the floor, before leaving the premises.

“Right away he started using obscenities at me, saying ‘F you,’ the c word, ‘Wear your f–king mask’ all of this,” she told ABC7 about a fellow customer after the video made the rounds.

“I did what any normal human being, a woman, would do if she was being harassed by a man, not knowing if he’s a crazy man, so I started yelling in self defense,”  she added.

Despite calling everyone in the store “Democratic pigs,” she said she has “no political agenda.” She also told the outlet she has no regrets and “what happened to me should not be happening to anyone else.” 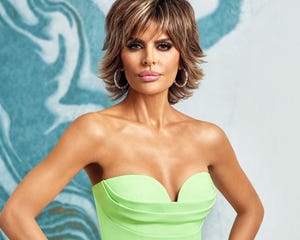 Why ‘Karens’ Are Trying to Get Lisa Rinna ‘Fired’ from QVC

Speaking with Fox11, she said she phoned the Toluca Lake Trader Joe’s ahead of time to explain her medical condition — which she didn’t elaborate on — and asked if she could shop without a mask. She claims she was given the OK, but wound up going to a different Trader Joe’s. Staffers at the Toluca Lake store confirmed she did call them.

“The manager eventually said, okay do your shopping, but just for today,” she then claimed. Once inside, she said a man, “started being very vulgar, aggressive and cussing me out.”

“They made it look like I’m this crazy person,” she continued, admitting she did throw her basket to the ground — but “not toward anybody.”

“All we’ve seen the last few months is division and hatred,” she added. “I am a human being. I reacted based on feeling helpless in this situation.”

Her outburst comes as cases of coronavirus have soared in Los Angeles. According to to the Los Angeles Department of Public Health, “Cloth face coverings MUST be worn anytime residents are around others not from their household, except by children under 2 and individuals with medical conditions that prevent use of a face covering.”

Look out below! Warren Buffett just dropped to his lowest ranking ever on the Bloomberg Billionaires Index