Jessica Schreiber was working at New York City’s Bureau of Recycling and Sustainability when she noticed an interesting trend. She was getting weekly calls from fashion designers asking what to do with all the fabric scraps, swatches, sample bolts, and production remnants left over at the end of each fashion season.

By law, if a business in New York City generates more than 10 percent of its waste in textiles, it has to be recycled. Most fashion design houses were exceeding that number and had no idea what to do with their waste. Schreiber wanted to figure out a recycling solution for the over 900 designers in New York City. She formed a working group to study the problem and developed a business plan for a company that would pick up the textile waste from design houses and find ways to reuse or recycle it. She even pitched her idea to investors on the show Project Runway: Fashion Startup. The judges advised her to create a nonprofit and awarded her with seed money.

In 2016, she launched Fabscrap, signing on 20 clients in her first year. Just four years later, 434 brands rely on Fabscrap to get rid of their excess fabric, including Eileen Fisher, Rebecca Taylor, Nautica, Oscar de la Renta, J. Crew, Tracy Reese, Macy’s, and Esprit. To date, the nonprofit has kept nearly 600,000 pounds of textiles out of New York landfills.

For a fee, Fabscrap picks up bags of unwanted fabric from a design house and takes it to its 4,000-square-foot Brooklyn Army Terminal facility. There, volunteers—mostly recreational sewers and student designers—separate the textile by fiber, then weigh and document each bag. Volunteers can take several pounds of fabric home for each shift they work. After the fabric is sorted, the organization sells it by the pound at its Brooklyn HQ, its year-old Chelsea retail shop, or its online store. Fabscrap also donates fabric to educational programs, women’s shelters, and event planners. A New Jersey company takes the remainder (about 40 percent of what is collected), shreds it, and turns the material into insulation for moving blankets or grade fiber for furniture. 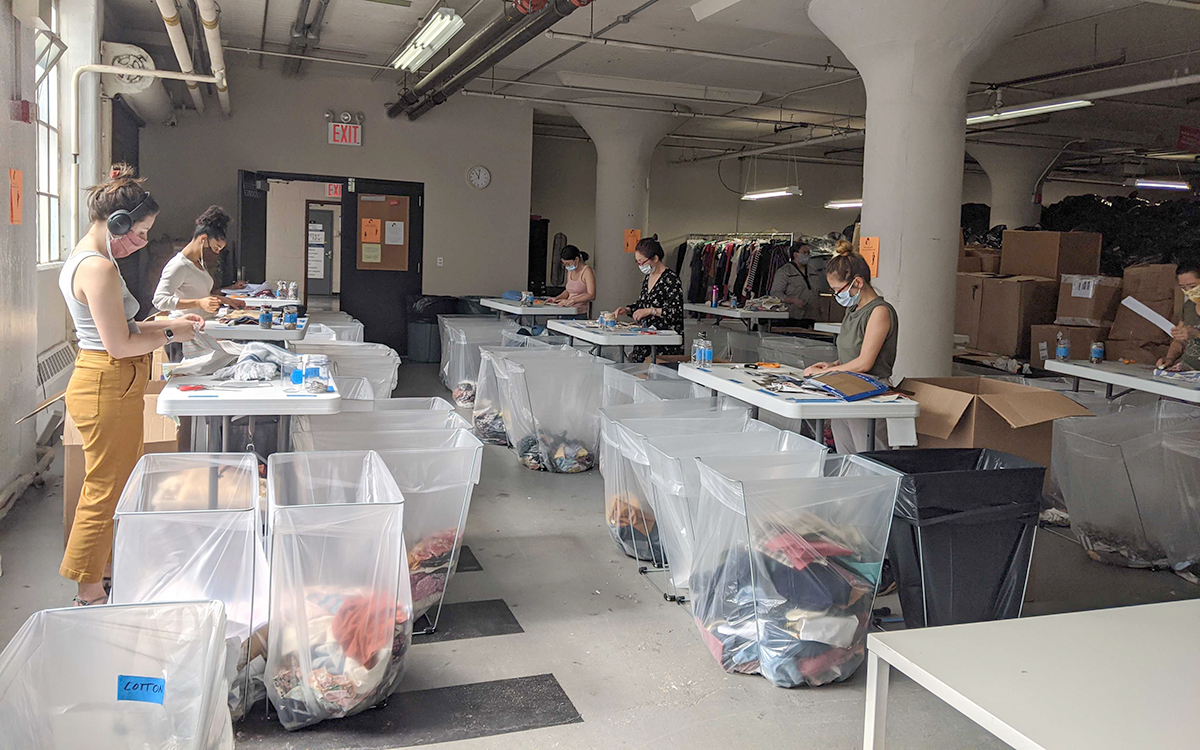 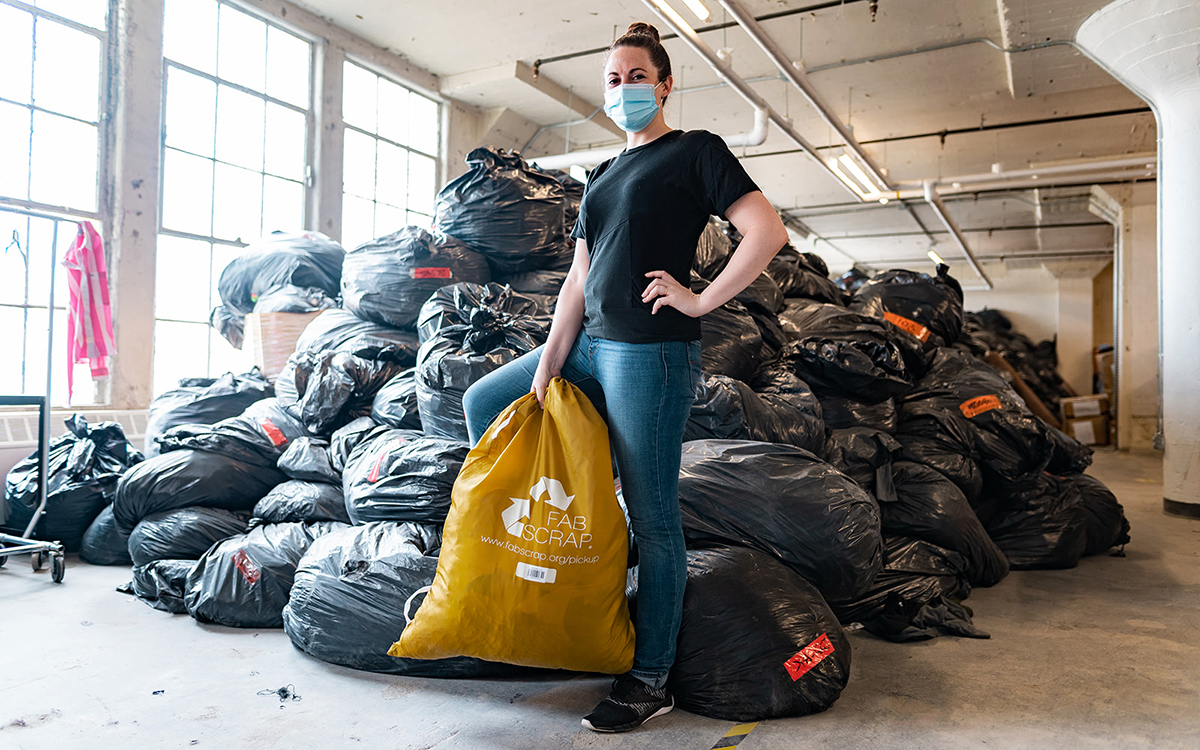 Schreiber’s main goal is to divert fabric from landfills. According to the Environmental Protection Agency, textile waste occupies 5 percent of all US landfill space and accounts for 10 percent of global carbon emissions. As textiles slowly decompose in landfills, they emit harmful greenhouse gases like methane. Additionally, chemicals used in the textile dyeing and finishing process contain carcinogens that can seep into the soil and get into nearby groundwater.

By tackling commercial waste generated by businesses as opposed to municipal or post-consumer waste (the clothing and linens discarded by households), Fabscrap is filling an important niche. Nationwide, about 12.8 million tons of post-consumer clothing is discarded per year, which represents about 6 to 7 percent of the waste stream of most cities. Another 5 million tons is commercial textile waste that ends up in landfills. Even though New York City has recycling laws in place to prevent such waste, they have proved hard to enforce. This is because commercial waste is picked up by private haulers, not the Department of Sanitation, and it is not tracked or reported as stringently as post-consumer waste. For example, private carters are usually hired by the owners of a building, rather than an individual company leasing space within the building, so waste from all floors—often from different industries—is usually mixed by the time it’s picked up.

For the fashion brands that have sustainability as a core tenet of their businesses, Fabscrap has been an invaluable partner. An early Fabscrap client, Lafayette 148 is one of these brands. Like many fashion companies, it sells unused yardage off at the end of a season or cuts and sews it into garments to be sold at sample sales. “But smaller pieces, cutting-room scraps, and mill headers have always been an issue, as the fabrics are too small for reuse and take up too much room to store,” says Caitrin Burns, the company’s sustainability coordinator. “We gave away bags of fabric cuttings to local artists, schools, and nonprofit organizations, but it wasn’t enough to take the volume that a company this size generates.” With Fabscrap, Layfayette 148 is able to clear out inventory twice a year. Each of these clean-outs generates between 300 to 500 pounds—about six to 10 Fabscrap bags—to recycle. 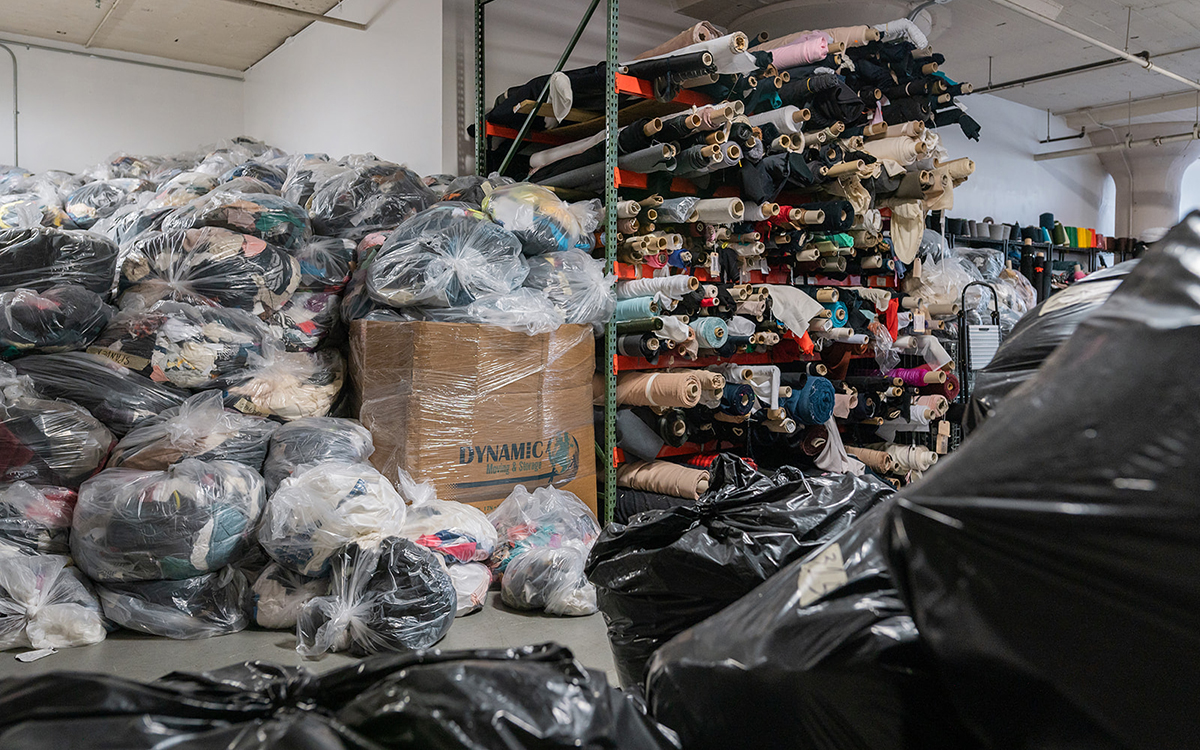 Fabric waiting to be sorted | Photo courtesy of Luna Photography 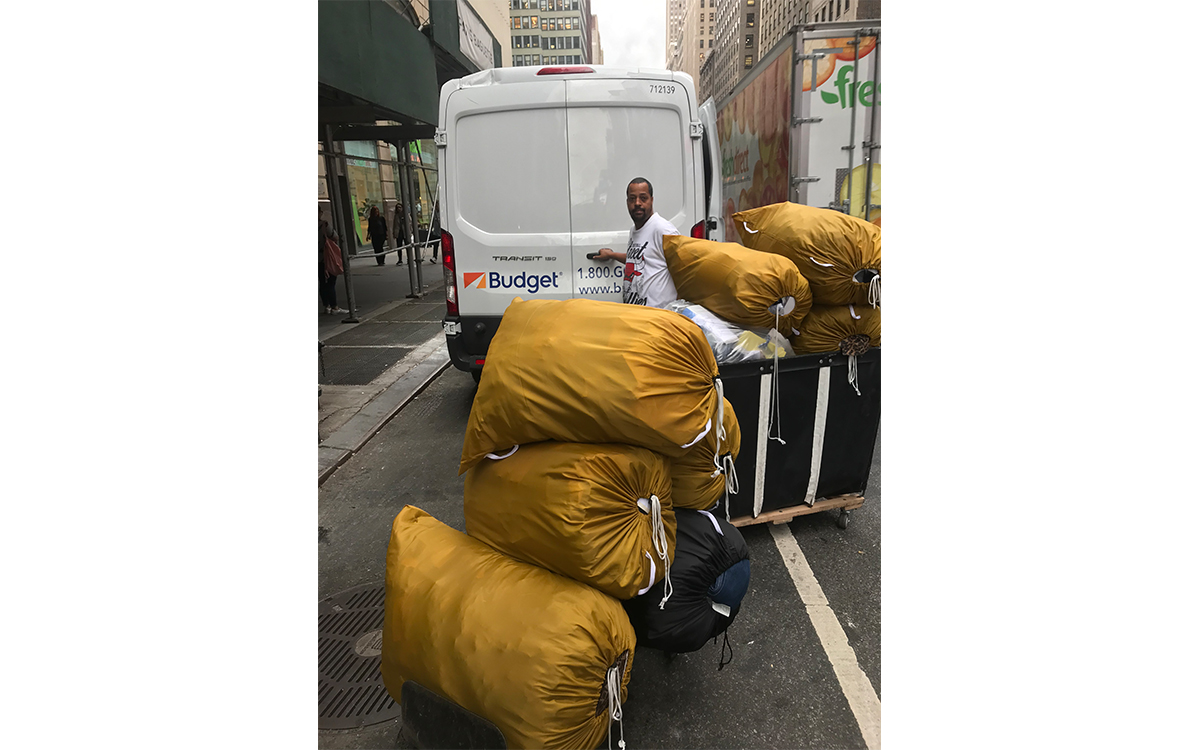 Unfortunately, most of Fabscrap’s operations came to a screeching halt in March, when the city went into lockdown. The pandemic set the entire fashion industry reeling—with so many Americans working at home, overall demand for clothing fell dramatically. With plummeting sales and shuttered stores, numerous brands and retailers, including Lucky, J.Crew, Neiman Marcus, Brooks Brothers. JC Penney, and Ann Taylor, filed for bankruptcy.

While shut down, Fabscrap received frequent calls from clothing companies who were going out of business and looking to unload fabric stock, and the organization permitted drop-offs at the warehouse. In July, it resumed pickups. Schreiber keeps a running bankruptcy list of design firms that she calls to see if they have fabric to unload. “There is so much uncertainty right now in the industry,” she says. “But we think we will see more companies closing and getting rid of fabric in the next few months.”

Before the pandemic struck, Schreiber had started making plans to expand out west. She’d been eyeing Los Angeles, home to the largest cut and sew apparel base in the US and the center of the country’s garment manufacturing industry. With an MA in Climate and Society from Columbia University, she’d like to see Fabscrap scale up to have an even bigger environmental impact. “Once you move to production, then it’s the waste that we see from creating the design for mass production of garments, the waste from cutting all the garments,” she says. “The volume would be exponentially higher.” How high? In New York, Fabscrap might pick up 10 bags every couple of weeks from a design office, but in Los Angeles, it could mean picking up 10 bags every couple of days from a cutting facility.

Schreiber hopes to open the Los Angeles office in 2021. Her loftiest dream is for Fabscrap to expand to other cities across the US and around the world. She says she’s received inquiries from fashion designers in Toronto, London, parts of South America, and Australia. “I think opening in LA gives us a really good blueprint for how we might be able to franchise this to other major cities.” 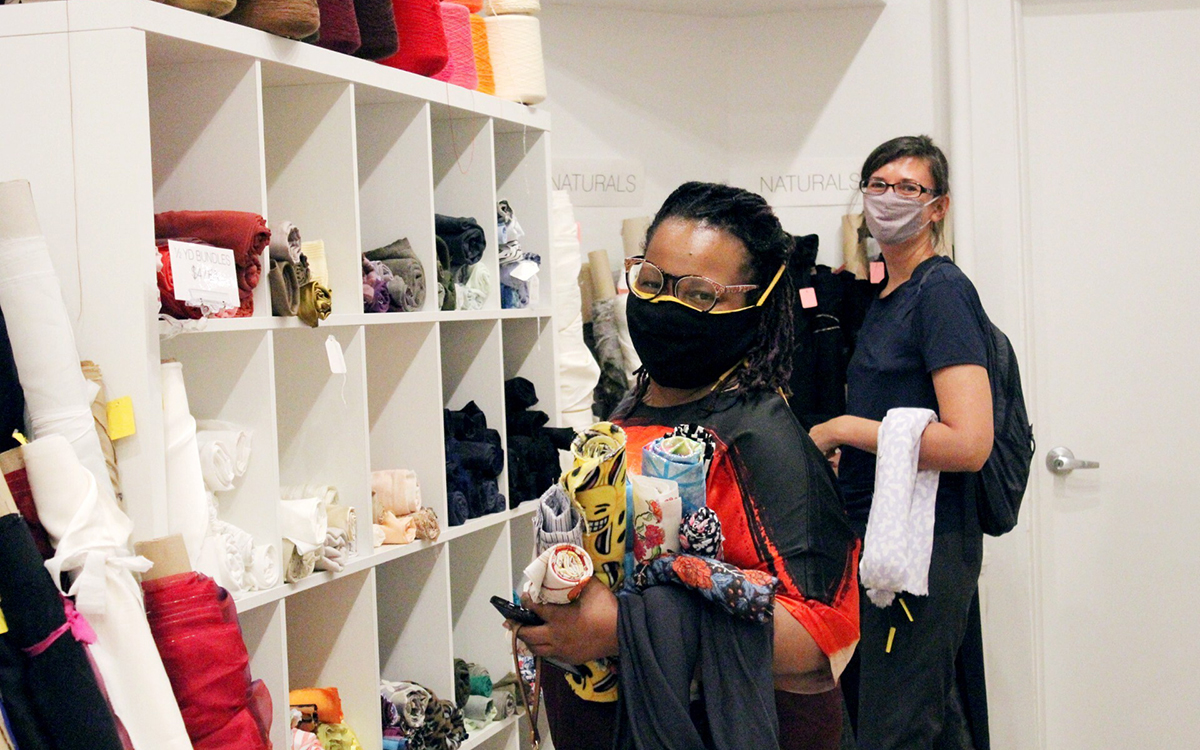