The war of words between Sonu Nigam and T-Series head honcho, Bhushan Kumar, is intensifying with each passing day. After indirectly accusing Bhushan of forming a ‘Music Mafia’ clique within the music industry, which could see similar cases of suicide, resulting from depression, as in the case of Susuahnt Singh Rajput, Sonu then posted another video on his YouTube channel, this time mincing no words about whom his wrath is trained on, warning the latter that he has messed with the wrong person. Also Read – Adnan Sami shows support to Sonu Nigam’s ‘mafia’ statement, says, ‘Change is here and it’s knocking on your door’

Posting the recent video, Sonu Nigam said, “Bhushan Kumar, I have to mention your name. And you deserve being addressed without respect. You have messed with the wrong person. Do you remember the time when you used to come to my home requesting me? ‘Brother, record an album for me. Brother, record ‘Deewana’ for me. Brother, introduce me to Smita Thackeray and Bal Thackeray. Save me from Abu Salem. Abu Salem is abusing me? Do you remember? Don’t mess with me, I am warning you.” Also Read – Sonu Nigam hits out at T-Series honcho Bhushan Kumar in a new video

Now, coming down heavily on Sonu, Bhushan’s wife, actress/filmmaker/producer Divya Khosla Kumar has called the singer “thankless” and has accused him of “playing with the minds of the audience” in two separate Instagram stories. “Today it’s all about who can run a good campaign.. I’m even seeing people being able to sell lies and deceits with their strong campaigns.. Sonu Nigam – such kind of people know how to play with the minds of the audience.. God save our world,” wrote Divya in her first post. Also Read – Jubin Nautiyal dismisses Sonu Nigam’s ‘Music Mafias’ comment; says, ‘Nepotism affected the industry in the past’ 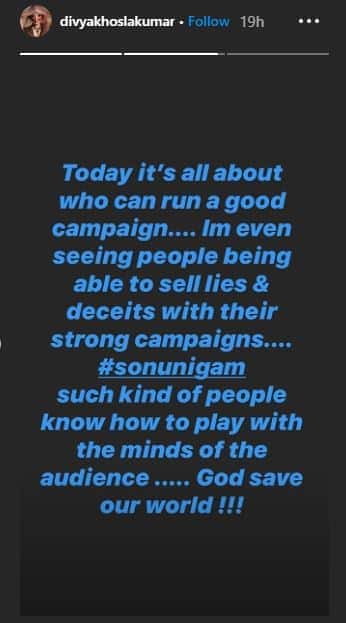 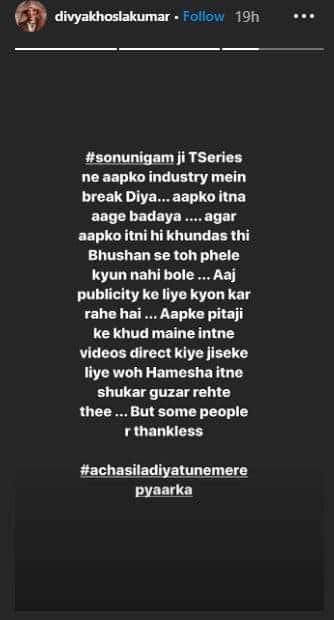 Time alone will reveal the truth.

Kelly Clarkson Spotted Without Her Wedding Ring After Filing for Divorce

Which Movies & Shows Are Canon